Select "General" and then "Rankings".

In the next list all existing rankings are shown. Here you can manage and create rankings. To create a new ranking select the green "+" at the top left.

After this search for your ranking in the first list and select "Seasons".

All seasons for which the ranking was active. Because this ranking is new it is currently empty. To change this select the green "+" at the top left of the screen.

Now you have to enter more specific information about the ranking, like if it is rolling, how many tournaments are counted and the maximum and minimum year of birth to be included in the ranking. 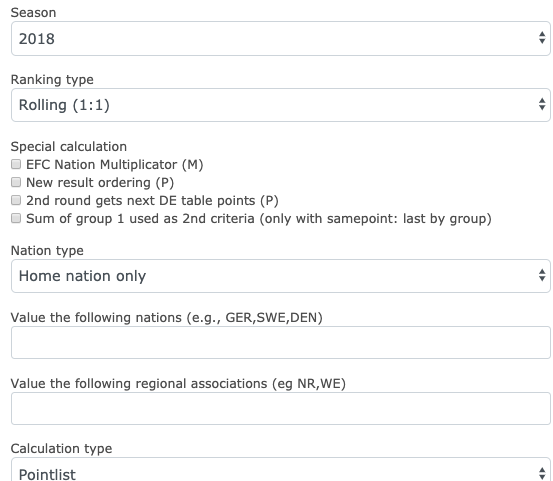 Next you have to add tournaments from which the raking will be calculated. To do this select "Competitions" in the season.

There you can add tournaments by selecting the green "+" and searching for the tournament in question.

After you have added a tournament you have to set a few options, from which group and point key are the most important.

You can change the following settings:

With this icon you can change general aspects of a ranking, for example the name, the weapon and the age class.

Deletes the ranking entirely. To ensure this does not happen by accident a security request is in place.

Copies a ranking in the next season. To do this a security request must be confirmed.

This symbol opens an overview over all seasons for this ranking.

In that menu you have the following options:

Toggles if a ranking is open to be recalculated  or not.

Toggles if a ranking can be transfered to Ophardt Touch, our tournament software.

Toggles if a ranking can be openly seen on Ophardt Online or not.

Recalculates the ranking for this season.

Opens an overview of the tournaments that are used to calculate the ranking. Here you can add, change or delete tournaments.

Shows different versions of the ranking, where the newest version is always at the top. The three symbols to the right stand for different formats.

Shows all athletes in the ranking sort by points highest to lowest.

If points where transfered over from a previous season the amount of points per athlete will be shown here.

Deletes the season. This requires a security request.

Opens a menu where you can change the settings for this season.

Which settings are used is usually governed by the federation or club that uses the ranking.

Lets you set the season.

Sets if the ranking is rolling, devalued or normal.

New result ordering - Specifically for the BFV, sorts out all athletes than are not in the federation that created this ranking.

Sum of group 1 used as 2nd criteria (only with same point: last by group) - If the same points are won in the last result however has more points in the first group gets the higher placing

Sets which license/membership an athlete has to have to be counted in the ranking.

Most rankings use point keys, only the swiss and belgian rankings are calculated differently.

Uses a second ranking as a criteria for the placings in this one.

Sets which season of the second ranking is used.

Sets the criteria by which the placings are decided when athletes have the same number of points.

Sets which years of birth are included in the ranking.

This many results are factored in when calculating the ranking.

Sets how many tournaments from the group are factored in when calculating the ranking.

Do not count First round, all other (2nd round etc) are counted:

Athletes that get eliminated in the first round don't get points.

Athletes with no points are also shown in the ranking.

Take into account for the ranking only x percent of starters:

Only the top X percent of results are used to calculate the ranking.

Deletes the results in the ranking after X months.

Percents of the points to be transfered:

Sets how many percent of the points of an athlete are transfered in the new season in devalued rankings.

At the set date all points transfered from the last season are deleted.

Used to calculate the swiss rankings.

Add the URL of rules:

You can add a link to the rules which the ranking uses.

You can add an exchange tournament to one in a rolling ranking.

Deletes the tournament from the ranking.

Lets you edit the setting.

Sets in which group the tournament is counted.

Deletes the tournament after X months.

Count only places till:

Only use the results to place X for the ranking.

Only places in direct elimination are counted (no rounds):

All athletes that get eliminated before the DE receive no points.

Invert setting for first round:

The points are multiplied by this value.

Assigns a whole group of point keys. The system uses the one that is stated in the result XML.

If a ranking is rolling you can assign an exchange point key. If none is given the system uses the same one as in the previous tournament.

If a ranking is rolling you can assign an exchange point key group. If none is given the system uses the same one as in the previous tournament.